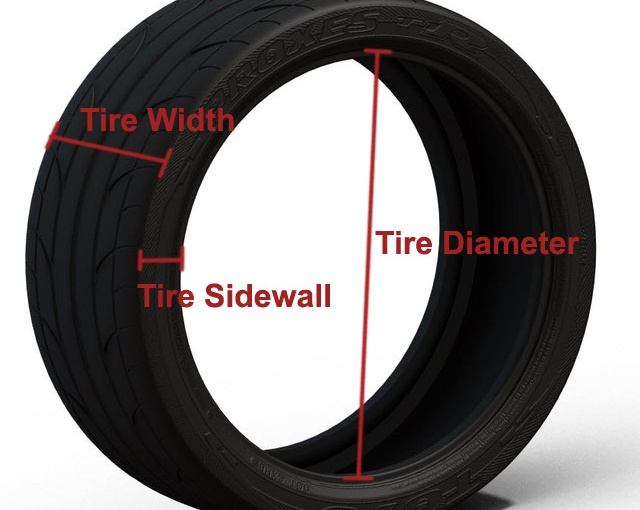 In an earlier post I mentioned how the tires of the Ford Escape could be quite expensive because on their size. I used the numbers 235 / 55 / 17 to describe them. But what do these numbers really mean?

They are all rather simple once you break them down and the next time you go shopping for tires you will know what the clerk behind the counter is talking about. Here goes!

Let’s start with the first number, 235. This number describes the width of the tire. It is calculated in millimeters, so this means the Ford Escape’s tires are 235 millimeters wide. The wider the tire, the more rubber on the pavement and hence the more grip you will have. This is why supercars have wider tires, along with other features, it allows them to corner much faster without losing control.

But wide tires aren’t necessarily all good. For instance, a wider tire will not perform as well in the snow, as it has to push through more snow and will spin out more easily. Also, the wider the tire, the more expensive they will be.

The second number is definitely the most misunderstood. You might know that it designates the height of the tire’s sidewall, but what you may not know is that it’s actually a percentage, a percentage of the tires width. Again, if we take the numbers above as an example, the Ford Escape’s sidewall is 55% of it’s width of 235. So the side wall should measure 129.25 millimeters.

Tires with a smaller sidewall are commonly known as low-profile tires, they are usually found on supercars, they provide various handling benefits, but because there is less rubber between the road and wheel or rim, they make a much harsher ride. Opting for a higher sidewall will give you a more comfortable ride. Spend an hour driving a Ferrari and you can expect to have a numb backside!

Finally, the third number is the diameter of the rim. This number is measured in inches. Expect to pay more for the tires and the rims as this number gets bigger.

Hopefully this brief explanation will help you next time you in need for a new set.